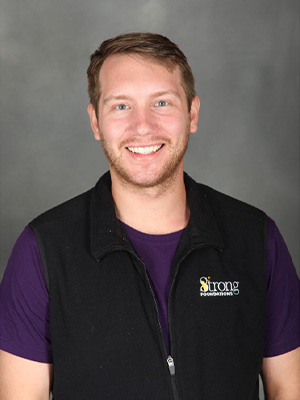 Nathan Gorgone is the Team Building Coordinator and a Senior ABA therapist at Strong Foundations. He has been part of the Strong Foundations team for over three years. He received his Bachelor of Science in general psychology from Eastern Connecticut State University in 2016. He is currently enrolled at Arizona State University, pursuing his Master of Education with a concentration in Applied Behavioral Analysis.

Nathan has been working in the human services field since 2013. He began working in adult group homes and eventually transitioned to working with elementary age students, where he discovered his love of ABA and working with kids! Leading him to Strong Foundations, where he has been an ABA therapist, Classroom Instructor, and now the Team Building Coordinator and Senior ABA therapist.

Nathan believes that our work is a team effort, with everyone on the same page and putting in the same effort on all levels. His philosophy is that when everyone works together, anything is possible for our kiddos!

Outside of work, he spends his free time with his fiancé and dog Cooper Jones, as well as playing volleyball, basketball, and golf.

Ready to find out more?

Review the services we offer, ask any questions here, or call us today!